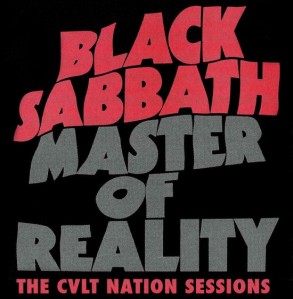 One of a series of cover records compiled by the CVLT Nation blog. The entirety of Sabbath’s ‘Master Of Reality’ played by a cadre of today’s Doom darlings. Doom, Stoner, Black Metal (sort of) and even a touch of Psychedelia. A nice idea well executed. Primitive Man’s opening cover of ‘Sweet Leaf’ is a monotonous, monstrous piece, laden with feral blast beats in the jam part of the song, a tone crushing enough to break through a wall, and an unhinged Vocal performance. This one’s the highlight for me, although Graves At Sea’s on-two of ‘Orchid’ to ‘Into The Grave’ is excellent, particularly their throbbing, wobbly Sleep-ish tone on the second number. The one track that doesn’t do it for me is Rorcal’s Cascadian/Doom take on ‘After Forever’; it’s not that it doesn’t work, more that I just feel it doesn’t fit well tonally. You may well disagree.

Most recent release from US Grindcore band Snuff. Brutal, 90’s style American Grindcore done just right. Burly, thrashing riffs, D beat/blast beat Drum vortex, grinding Bass and howling low/shrieking high vocal squawk tag team. There’s a big influence of Crust/Grind stuff like Disrupt or Excruitating Terror, throw in some Rot and Terrorizer and you’ve got it. This actually reminds me most of Internal Rot, in their 90’s vibe and Crust influence. The recording quality is clear but grimy enough to satisfy, particularly the old school sounding Drums and super loud in the mix Vocal. Furious.

A collection of mobile phone recordings released this month on Mortville Noise. Andy has been compiling this thing for a year, and it is truly, unbelievably, monstrously noisy and terrible. It very well surmises Andy’s intent to release the maddest sounds ever, for free, and with the level of community spirit you would expect from someone who’s dedicated this much time to all this nonsense. There are familiar names such as Gonzo faves Albert Tross, Happy Pill Trauma, Sauerkraut, Cedric’s Lettuce, and of course Captain Three Leg and Dumb Church, and some who are using code names for their heinous crimes against music here, such as Hyperemesis mastermind Andy’s contribution under the guise of Inconsiderate Roommate. I’ve played this to friends outside of Grindcore or Noise or whatever, and their genuinely stunned, nauseated faces and/or hysterical laughter told me everything I needed to know. This is some of the funniest, harshest, most ridiculous, pointless sound I’ve heard committed to recording. There’s some semblance of genre from track to track, in the shape of Noisecore/Grindcore blasts, but really this thing defies any genre tag in it’s complete disregard of music, even within the noisy circles we dedicate ourselves to. Horrible, hissing Ambient aggression, recordings of people urinating and jogging, real-quick boombox Grindcore takes, voicemail messages, Noisecore fury, muffled no-core, some of the worst recordings scraped from the darkest recesses of the internet underground. One of the worst  things I’ve heard this year. One of the best things I’ve heard this year. A true Gonzo assault on common sense and human decency. What. The. Fuck?

4 song, 4(ish) minute demo from US Mincecore band Haggis. Meaty, fat Guitars and super belching spew vocal over forever mincing Drums, with furious blasting parts scattered about. Sloppy, raw and stompin’. Very straightforward, no bullshit, three chord Mince/Grind destruction. Production wise this sounds like it was recorded on a 4 track and has that raspy, hissing tape quality, perfectly suited to this sort of nonsense. I hope to hear more from them soon. For fans of Agathocles (duh), Archagathus (duh), Lt. Dan or Blood Suckers. Mince!

A couple of exhumed recordings put together for a split, from Captain Three Leg and Ookla The Mok. Ookla first, whose nasty, gnarly blasts of super fast Hardcore, over cranked Noisecore ditties and Noise blurts makes for an angry, excellent listen. Cruddy, crackly recording quality with rad vibes. Lots of genres touched inappropriately. I hear theremin, so I’m happy. And oh man, the cover of ‘who are you?’ by Void is fucking awesome. Captain Three Leg’s tracks are taken from the same session as the Mammaracho split, and share that muddy, gravelly sound from the split. Thick, almost Pornogrind-ish sounds here, but with plenty of left field samples, wobbling synthy Noise and thin Guitars to firmly establish this within the Captain’s strange field of operations. Lo-fi blasts of gory super low vocal Drum Machine slurry, bringing to mind Catasexual Urge Motivation and Red Krayola at the same time. Indispensable. 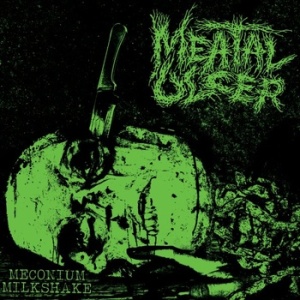 A pairing of current masters of the Goregrind underground, released on the excellent Goatgrind Records; Hyperemesis from Canada, Meatal Ulcer from Australia. The Hyperemesis side of the split is some of their most traditional and I guess listenable Mince/Gore.The production is predictably disgusting, but with plenty of clarity and much less of the snare-ringin’, everything-in-the-red sound I’ve come to expect from the Hyp. The vocal, Guitar and Drums are each individually audible, and each have a nasty, crusty sound on this release. Andy’s vocal retch/roar is still absolutely putrid and acidic, made all the more gross for it’s audibility in the mix. These songs just grow on you hard, with generally more mid-paced Mince stomp / D beat punk vibe on these tracks, with lots of downturned Sludge moments amongst the Grinding slop. Punk as fuck. The Meatal Ulcer side of the split is 6 tracks of vomitous Goregrind/Noise crush. Walls of Guitar, unwieldy programmed drum tornado and necrotised aquatic gurgle vocal. There’s lots of dynamics in the arrangement, keeping this Noise fresh and your mouth agape. Raging, slimy, chaotic. This material predates their excellent full length ‘Why Won’t It Die?’, but if you saw my review of that and enjoyed it this one’s a no brainer. You can download the Meatal Ulcer tracks for free, and stream the Hyperemesis tracks from Goatgrind until you can get a physical copy or a download is made available for the freeloaders. A wonderful pairing of horrid grue peddlers!

Deboned is an old school Death/Grind band from Canada, playing some rancid, malicious Death Metal slop augmented with Grindcore fury. Long movie samples give way to whirlwind blasts of grinding Bass, furious blast beats and throaty, manic, garbled vocal, with thrashin’ necro riffs here and there and plenty of D beats keeping the whole thing the right side of Deathgrind. This has a seriously heavy Repulsion vibe, in the stripped back Punk sound and primitive proto blast beats. The guitars here have a classic scooped Death Metal sound, which works excellently amidst the grinding carnage. The mix is excellent, sounding dirty yet with just enough clarity to bring everything into focus. Totally inbred, crushing and retarded. And man do I love the artwork! Highly recommended.