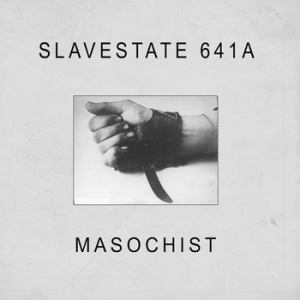 Luke and Ryan of Slavestate 641A and Robocop, among other projects, both kindly agreed to an interview about their Slavestate 641A ‘Masochist’ release on Grindcore Karaoke

How did Slavestate 641A come about? What was the impetus to move away from the sound of Robocop post-‘Dead Language, Foreign Bodies?’

Ryan: The not so terribly secret fact about this record was that it was supposed to be a Robocop e.p. Originally, Tom was going to play an electronic drum kit and it was going to be an incorporation of early noise and industrial (think SPK, Throbbing Gristle, etc.) influences into our sound. Tom couldn’t make it, and we had planned for him to double the tracks or do some vocals. That didn’t end up happening, so Luke and I didn’t feel we wanted to call anything without him on it Robocop.

As for the sound of the record, all of our earlier albums have had a different sound than the predecessor: the demo was recorded mostly live and very much sounds it, Robocop II was much more worked over, Dead Language Foreign Bodies was the first time we recorded in anything resembling a studio. We consciously wanted to move away from the sound of that record because it was a little too cleanly produced for our taste. The context in which we were recording (I was moving out of my house the next day, and we had one day to record), probably influenced the style. It was much more about experimentation and hearing what would work.

Luke: Moving away from Robocop, in my mind, was more of a submission to the facts rather than something I would have pursued intentionally. Without Tom, I feel like a lot of Robocop’s spastic, high-energy thrashing was left wanting. Between Ryan and myself, more of the darker and dismal energies remained and I guess that was our launching point.

What equipment was used in creating the record?

Ryan: My usual generic 7-string guitar, bass, programmed drums, waterproof contact mics, a dual square wave oscillator synth I made with a few control knobs and a light sensor, a microphone with a piezo disc attached to a can of ice-tea with the top cut off, a bathtub, etc.

Luke: At the time, both Ryan and I were exploring analog sound/technology and building ways to capture and produce sound from scratch. We came together with some contact microphones made water-proof by a synthetic rubber as well as what I believe to be Ryan’s first audio producing synth: what seemed to be a sine wave generator with a pitch control and some modulation.

What influenced the sound of the record?

Luke: The sound of the album then comes pretty directly from the environment we recorded in as well as a few objects we were using at the time. The vocals to Screwdriver were recorded using a contact mic and an Arizona Ice Tea can as a resonator. In fact, we tried using that can as a resonating chamber for all of the sounds on that track but I believe we left it only on the Vocals, guitar and synth. Of course, there are also the vocals underwater. Self perception is often misleading but I think that, as far as this album goes, my overall contribution to the sound comes from thinking of stupid ways to try and use the cool ideas that Ryan has. I don’t say stupid to be self-depreciating as much as I’m referring to my complete lack of discretion for my ideas on how to employ the new tech we had. We tried and otherwise shot down an awful lot of ideas which were a little more asinine (e.g. taping the mic to a chip bag and screaming into it) but I think the fact that both of us entertained those ideas is pretty central to what we ended up creating (the same could probably be said for Robocop…). All of that and hearing Godflesh for the first time (I’m definitely the new kid on the block in our group).

What influenced you in recording ‘Masochist’ the way you did?

Ryan: While we were referencing what we had done previously in Robocop, we really felt like we could reconfigure what we were doing so as to make it unrecognizable. It was important to do something new, because I felt like, on our own small level the vultures were coming in and picking at our earlier work. I was honestly incredibly frustrated with what was passing for ‘interesting’ or ‘intelligent’ in music and had spent three months in the middle of nowhere to think and regroup. Most of the recordings for what has become Body Hammer II were done during that time.

Regardless, I wanted to make something personally meaningful that didn’t abandon punk and hardcore but related to it in a different way. I like the idea of constructing something familiar, but formally organizing it so that it feel odd and uncomfortable. For example, the lyrics for Screwdriver was taken from lyrics I was writing, a short story, and quotes from other writers that I fed into a piece of software which reorganized the material. I’m influenced by the use of detritus in art such as Gutai, etc. and for me, the lyrics of that song remind me finding scraps of ads and junk mail in the winter slush by the side of road. There is an element of corruption and entropy there, but also of organization beyond your control.

The recording of both works was also influenced by the thematic content. Reptile Enclosure was primarily focused on claustrophobia and water. When I was around 8 or 9 years old I nearly drowned after walking on a frozen lake and falling through the ice, and the summer before I recorded Masochist, I had a really terrible case of pneumonia that for whatever reason wasn’t properly diagnosed for a month or so. I felt like I was going to drown in my own mucous. This track has a number of references to internal/external drowning. I had made an earlier recording inside of a fountain using contact mics, so we used that, as well as waterproof microphones I’d made to record some of the underwater screaming and flailing at towards the end of the track.

Luke: All of the recording decisions we made were largely guided by the lack of time we had. Ryan was in Vermont and I knew that was gonna be our only chance to record anything face-to-face in a while so I drove down there and we had a day to buckle down and do whatever we could to create something. If you knew how much fun it was to make music with Ryan and Tom, you’d probably make the drive in a heartbeat yourself. That being said, I personally carried a lot of emotional pain into this recording and being on a time restriction really accented that at times. I was also extra pissy because my wife and Ryan’s fiance were binging on Pretty Little Liars together; if you’ve ever watched that show you’ll know what I’m talking about I think.

What are your thoughts about the finished piece?

Ryan: Only that it contrasts very strongly from the experience of making it. Luke and I are very high energy when we’re working together, and it seemed like every insane idea we had was coming together in a way that worked well. The finished e.p. feels very cold and calculating, but writing it was the exact opposite.

Luke: The final piece carries with it all of the memories from that day: good, bad, whatever. It also is a showcase to me for some direction(s) we may end up pursuing more fervently as we continue to make music and I find that really exciting. I’ve been listening to a lot of Ufomammut recently too so I’m hoping that we can come together for really punishing epic in the future.

Any plans for more releases?

Ryan: I’m hoping we can have something together next year. We’ll see.

Luke: Ryan said he’d be up here for Christmas and Tom said he’d be here for Halloween so I’m guessing that new material is inevitable in the near future. I’ve also been working on a number of different things alone up in the Frozen North that I’m hoping will get the Slavestate blessing soon. Turned a gas mask into a microphone so you know it’s eventually gonna be something cool!

Any other news regarding Robocop, Body Hammer or other projects?

Ryan: This year we all put out a number of releases. Tom released e.p.s with Ultra//Negative and Bonethrone. Luke released the first Giantgiant album after working on it for 7 years, and I’m releasing the second Body Hammer album in December/early January. I am also finishing up a demo for a new power violence band called Abrasax that I started with Ryan Jobes (ex-Sutekh Hexen, Sunken Cathedrals, Cube ov Falsehood) and will be out via Vestige Recordings early next year, as well performing with Rhys Chatham and Night Worship in the next couple of weeks. Earlier this year I started mastering other bands starting with the Heroic Quartet/Ben Tinker + Tara Sreekrishnan split, and early in December I’m engineering a recording for Pink Gaze. I’m currently putting together a vhs of Robocop’s last show, along with some videos I made along the similar lines as Aftermathematics. I’m sure I’m missing important things.

Thanks again to both Ryan and Luke, who were paid in obscure pedals and DVD’s of terrible Bruno Mattei movies for their part in this interview. Here’s looking forward to more Slavestate 641A, and the highly anticipated ‘Body Hammer II’!

If for some ridiculous reason you haven’t downloaded one of the year’s best releases for free, do that here – GK#445